Masterthread for your Feedback [Headstart/Launch]

Spamwagon said:
It really does seriously irritate me that unlike every other hotbar game IN FREAKING EXISTENCE you don't LEFT CLICK to make a skill fire from your hotbar. Left click brings up a stupid drop down menu for selecting what should go in that hotbar box. I hate this - really really hate it. I have tried altering the controls in the menu, but regardless of what boxes I check in the "mouse" settings, it does not change. I highly recommend you change the default settings to be more inline with what everybody's muscle memory knows. At the very least, make it so we can change it manually.
Click to expand...

When do we get backpack expansions? =D

Also, a material exchange NPC. A vendor for trading out certain meats for other meats, for example.

Atra Crystal Fusion. (Fusing so many of the lower level atra crystals into higher level ones, just like we do with Runes and Star Jewels.)

Make the waxes we get from Zender tradeable.

The main thing we need is a Frost outfit, for sure.
Last edited: Jan 24, 2020
Reactions: Naunet, Pirylio and Oklmq
T

Frostbyte said:
Make the waxes we get from Zender tradeable.
Click to expand...

as soon as these two things are taken care of, i'd support your idea
Reactions: Oklmq and Naunet
A

I'll just give me 2 cents here about what I think is lacking or would like to see improved. Like everyone else this is my opinion so take it with a grain of salt.

Secondly and most importantly, I really like the way the combat looks but not so much how it feels. It's very class dependent but there is a lot of instant cast skills that lock you in place, which makes no sense to me. It just feels like you get robbed of your freedom during combat and makes it feel very clunky. It very much reminds me of the Echo of Soul combat, although it's not quite as bad.
So far I've only played 3 classes and I can tell that it's very reliant on which one you play. I understand having to be stationary for certain skills like non-instant cast abilities.
Personally I don't see the point in locking your movement altogether, just make it so it cancels the cast when you move like it does in other games like GW2, WoW and the likes instead of stopping you dead in your tracks. It makes overall combat feel a lot smoother and controlled. If there's any specific reasoning behind this I'd be more than happy to know what it is though, because several games have done or are still doing this and I'm not quite sure why.

Thirdly I like being able to customize the UI so kudos for that, however I noticed that certain frames, e.g. target frame, can't be moved/changed, which kind of confused me.

And lastly, more of a personal issue rather than a widely spread one I imagine, when trying to stream/record (with OBS at least) using a window or game capture does not work if the game is run in fullscreen. I have to use a display capture which I'd very much like to avoid for performance and privacy reasons. I can use a game capture when the game is running in borderless, but my performance apparently takes quite the hit if the game if not run in fullscreen and I have by no means a weak rig.

That being said I enjoyed my overall experience so far, albeit somewhat brief. I might make another post once I've been able to play the game a bit more and explore more content.

Also looking forward to the steam launch, hoping it'll bring some life into the game.
Reactions: kaze_no-jin and Oklmq
S

First off: I like this game a lot just traditional mmorpg awesomness. Keep it up!

But I want to report a quest bug:

the lvl 50 Quest row "-***- Rashan Judge" sometimes leads to the wrong npcs. For example: Quest says "go to GI-3 Orha on Aeunaril" but it requires you to go to Habe in Humbaul Fortress.

should be a minor fix thx a lot!
D

Character deletion time needs to be reduced to 10 minutes at the least and 1 hour at most.

A walking mode would be nice (and no auto-running is not walking).

I would like a preview of the running animation in character creation. Sometimes characters look good standing still and then are all janky lookign while running.

If we could have a hot-bar added exclusively for Treasures, that'd be nice.

(Click images to enlarge. They show an "Example" of what this could look like. Before and After pics.) 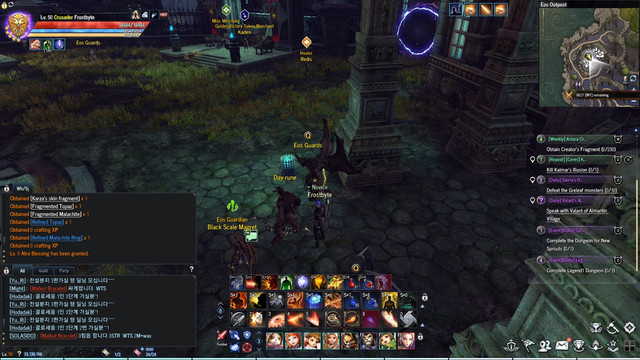 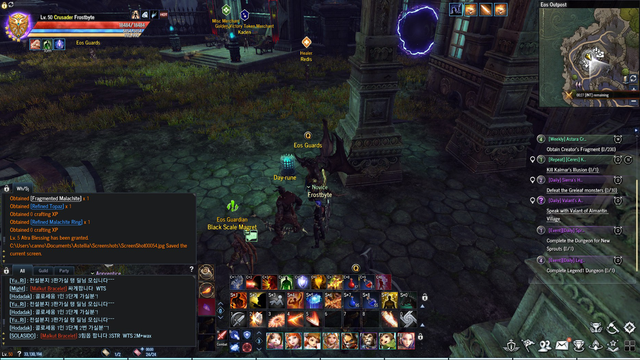 i would love to see some changes as follows

-increase of Droprates in any Dungeon
-remove the Ticketsystem or change it, you could get asked if you want to spent tickets and if you choose to spent them, you will get increased Droprates so basically a better Ticketbuff because the one we have is kinda useless.
Or you dont spent them, in that chase you will get less Droprates, less gold and no astel pack
-more classes and maybe a rework of the ones we have because i think 2 new skills for a sub class is not enough.
-do something about this annoying rng, maybe add a function that allows you to reroll stats for like 100 stelite and 1m asper or whatever, increasing the resources for every recoll attempt.
- add a way to get more stelite, a weekly quest would be great
T

what would realy be nice would be a list of treasures and titles ... where you can choose you're aquired titles from
becouse as it is now, the titles alone [especially the titles NOT buyable ingame again (like all the event / story / quest / acchievement titles)] take up massive space

what would realy be nice would be a seperated inventory slot for these avalon treasures [becouse they do take up massive ammounts of space within an already highly limited inventory] ... and ... they are not treadeable (to another char for storage) ... not sellable (to a vendor), not scrappable ... and not even throwawayable ... <- at least the last one would be highly neccacary

wouldn't it be possible to create another "just picked up" temporary inventory ... with ... let's say 10 slot's for all these quest items ... ?

and the funny thing though is ... that we seem to have sevaral different types of atra tronics ... all called "atra tronic" within the game ...
yes, the litteraly refuse to stack ... even though, they're basically the same item ...

especially bad that whole situation was during the oscar chests ...
where every single stack of upgrade-stones requested an additional free inventory slot [even though ... there where already stacks with enough free space within the inventory]
L

What is up with the new Crafting
I got a full Page in W H of Elements what do i do with them
Reactions: Oklmq
You must log in or register to reply here.
Top Bottom